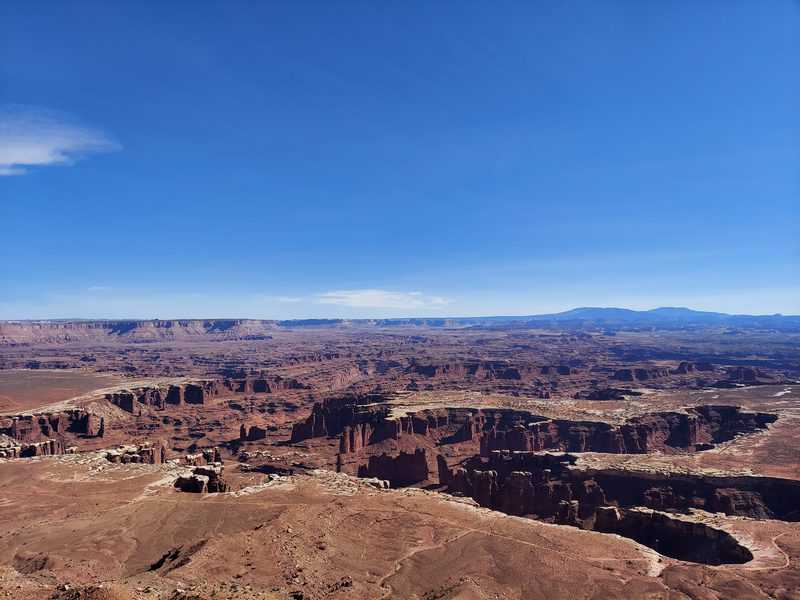 So you only have a half day to see Canyonlands?

No problem, we have designed a half day itinerary to help you experience Canyonlands National Park to the fullest extent possible.

Canyonlands was our second choice of National Parks in Moab but it definitely deserves more props than it gets.

Canyonlands is beautiful, approachable, and fairly easy to see. Much of the Island in the Sky park district can be seen from accessible viewpoints.

Can you do Canyonlands in one half day?

Absolutely, half a day is the perfect amount of time to do Canyonlands Islands in the Sky including a few short hikes.

If you have one full day to do Canyonlands, you may want to consider explore outside the Islands in the Sky district.

It is possible to prioritize your time and easily see the top attractions at Canyonlands National Park in half a day:

Start your visit to Canyonlands at Shafer Canyon Overlook. It has a large flat area with great views of the surrounding canyon.

You’ll notice a really curvy dirt road, Shafer Canyon Trail, leading down into the canyon from this viewpoint.

The Shafer Trail was once used by the Mormon Shafer family to move their livestock herds from the summer pastures atop the mesa into their winter pastures further inside the canyon.

Today the Shafer Trail is a recreational 4×4 path that many visitors explore in rented Jeeps or on 4WD tours.

Mesa Arch is one of the top photographed locations in Canyonlands.  It is a very popular sunrise spot with photographers and should not be missed at Canyonlands.

The area had been fairly well trampled and there were many well-worn paths to the arch.  Please protect the fragile biological soil crust by sticking to the established trail.

Expect a lot of crowds at Mesa Arch and pack your patience.

Midday, it was so crowded we had to snap our pictures quickly between other visitors posing in front of the arch.

How long is the hike to Mesa Arch?

The whole loop trail to Mesa Arch is 0.7 miles with minimal elevation gain but does include some stairs.  However, most Canyonlands visitors take the direct 0.5 mile out and back path to Mesa Arch.

The trail is a bit rocky and uneven but we saw all ages and fitness levels on the way to the arch.

Based on guidance from Gypsy, we also chose to take the Whale Rock hike.

The one-mile trail is rated moderate by the National Park Service and leads up the side of a whale-shaped sandstone dome.

Can you hike Whale Rock if you are scared of heights?

Yes, you can hike Whale Rock at Canyonlands if you are scared of heights.

I have a fear of heights and was a bit trepidatious of the “steep drop-offs” described in the NPS brochure.   The majority of the Whale Rock hike was fun and manageable for those with a fear of heights.

My anxiety was only triggered when Kevin wanted to cross from the back of the whale to its head.

This required walking along the edge of the dome on a narrow path with a steep drop-off.  After a minor freak-out, I decided to sit down on a nice wide flat area along the whale’s back and wait while he explored.

Despite the temporary moment of panic during the hike, I really enjoyed the sweeping views of the Island in the Sky district from the top of the ‘whale’s back’.

Upheaval Dome is an optional stop if you only have half a day at Canyonlands. It is a moderately rated one-mile trail to Upheaval Dome.

What is Upheaval Dome?

Upheaval Dome is a scientific mystery and several theories exist to explain the oddly shaped three-mile-wide disturbance in the rock.

My favorite theory is that a large meteor landed millions of years ago causing a crater that eventually collapsed.

Upheaval Dome is really odd-looking since the area surrounding the crater alternates between peaks and valleys of rocks, called anticlines and syniclines.

Grand View Point is the southernmost point of the “island” and the last stop on the park road before you’ll turn around.

There is a short paved trail at Grand View Point in Canyonlands leading to spectacular views.

Beyond the paved path, there is an additional one-mile unpaved trail leading to a second viewpoint with equally beautiful views.

National Park Visitor Centers are a great free resource for park visitors to learn about the area. They include educational displays, videos and the most overlooked NPS treasure, park rangers.

Park Rangers can provide recommendations based on your interests, skill level and schedule.

If you have time in the half day itinerary, then stop at the visitor center to learn about the history, geology and wildlife at Canyonlands.

Canyonlands Facts at a Glance

Island in the Sky District

Island in the Sky is the most accessible area of the Canyonlands.

The “island” was historically used by local ranchers to freely graze livestock herds all summer without the worry of losing them.  There is one safe way in and one safe way out.

The “island” is a sandstone mesa resting on thousand-foot-high cliffs.

What is Canyonlands known for?

Needles and the Maze are more remote and require either backcountry hiking permits or 4×4 vehicles.    Horseshoe Canyon is about 2.5 hours from Moab and access is via a 30-mile graded dirt road.

Canyonlands is best known for its breathtaking views of the canyons, mesas, and buttes eroded by the Colorado River.

What is there to do in Canyonlands?

A few of the most popular activities in Canyonlands include hiking, technical rock climbing, off-roading, and backcountry camping.  Canyonlands, a dark sky park, is also great for stargazing.

You can easily fit in several short hikes during a half-day visit to Canyonlands National Park.

Can you drive through Canyonlands?

Canyonlands Island in the Sky division is perfect if you just want to drive through.

The paved park road has many scenic viewpoints highlighting various areas around the island including a view of the Maze.

Most of the Canyonlands Island in the Sky highlights in our half day itinerary can be viewed within one mile of the park road.

If you want to see Canyonlands in a half a day and you are willing to pay someone else to drive and plan it all, consider a guided tour.

The most highly rated half day Canyonlands tour is a 4WD tour that leaves from Moab three times a day. A professional guide will take you on the Schafer Trail before checking the best overlooks at the Islands in the Sky.

This guided tour also goes a little off the beaten path at Canyonlands by visiting less-visited Pueblo ruins.

Is a half day enough in Canyonlands?

Canyonlands Islands in the sky can easily be explored in half a day including a few hikes.

The Islands in the Sky district is significantly less crowded than Arches and equally as beautiful so don’t miss it on your Moab trip.

How long does it take to drive through Canyonlands?

If you have very limited time, you could drive through the park with stops at a few scenic overlooks in 2 hours or less. Keep stop times to a minimum and skip the walks at Whale Rock and Grand View if you are in a rush.

Can Arches and Canyonlands be done in one day?

Absolutely, Arches and Canyonlands can be done in one day but it will be a long and tiring day. You’ll only hit the highlights of both parks but it’s better than missing one completely.

Check out our hour-by-hour One Day Itinerary for Arches and Canyonlands in Canyonland vs Arches.

Maximize Your Canyonlands Half Day with Gypsy Guide

Driving Canyonlands is much more enjoyable with the Gypsy Guide app.

The Canyonlands guide can be purchased for under $10 but the Utah Mighty 5 Bundle is a better bargain if you plan to visit all Utah National Parks. Tours do not expire.

Gypsy Guide is like a podcast that only shares items about your exact location. He even tells you what to expect at each trail or overlook. The app doesn’t need a cellular signal once downloaded and is great to keep the whole family entertained during National Park visits.

How do you spend a few hours in Canyonlands National Park?

If you only have a few hours in Canyonlands National Park, then just plan to explore the scenic drive and stop at as many overlooks as possible. Gypsy Guide will make the trip more enriching without requiring extra time to read each roadside sign.

Canyonlands National Park is the largest national park in Utah and it is located 32 miles from Moab Utah in the high desert.

Sadly, Canyonlands is usually the second or third choice of visitors, who typically flock to Arches.

Where to Stay in Moab

Moab Utah attracts adventure and nature lovers from all over the world. There is no shortage of places to stay including several well-appointed national chains.

If you prefer camping, check out Arches National Park Camping: Options from Free to Luxury in Moab.

Which is better Canyonlands or Arches?

You may be wondering which is better Canyonlands or Arches.

For us, Canyonlands was better than Arches because we could actually visit the park when Arches was closed due to overcrowding. In 2022, Arches requires timed entry reservations from March until October.

For a complete park comparison and how to visit both parks in one day, check out Canyonland vs Arches: How to Choose the Best National Park in Moab.

Summary: Canyonlands in Half a Day

We were able to drive through Canyonlands Island in the Sky division, including several short hikes, in half of a day.  It was an enjoyable, unrushed pace and allowed us plenty of time to see the park.

Even if you have a limited amount of time available, you can have a perfect time at Canyonlands in only half a day.